In 2013, the officers and directors of the Harvard Club of Dallas voted unanimously to establish the “Betsey Bradley and Hal Urschel MD Community Service Fund” and to seek donations from both Harvard and non-Harvard individuals alike to fund it. The Fund will be used to support a paid Harvard undergraduate intern participating in the Summer Community Service Fellowship program in Dallas.  This Fellowship 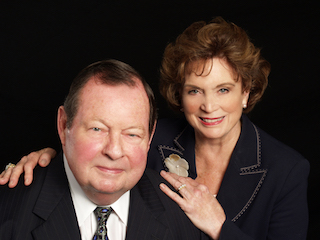 is run out of Cambridge by Phillips Brooks House on a national basis. Lately the cost to the Club per intern has been $3,000 plus.  This covers a stipend for a College student working with a non-profit in the Dallas area. In the past, these funds have been raised from the membership on an annual basis. It has been a very successful program and well received by the Dallas community.  The recipient works on his or her chosen project and reports to the Club at summer’s end.

The Fund is named in recognition of Betsey (M.Ed. ’63) and Dr. Hal Urschel (MD ’55) for their services to the community, the Harvard Club of Dallas and Harvard University. Betsey was President (1993-94) when the Harvard Club of Dallas funded its first summer public service internship in the mid ‘90s. Subsequently, she became Chairman of the Club and then went on to serve in several national Harvard offices including becoming Harvard Alumni Association (HAA) Director for Texas, HAA Director and Vice President for University Affairs and on the Executive Committee of the National Board of the (HAA).  During  her tenure, Betsey chaired or co-chaired the visits to Dallas of three Harvard presidents, Neil Rudenstine in 1996, Larry Summers in 2003, and Drew Faust in 2014. President Faust participated in the celebration of the Club’s highly successful Centennial “Your Harvard: Texas” event.

A recipient of the HAA Alumni Award in 2005, Betsey was awarded the Harvard Medal by the University at Commencement on May 26, 2016. The principal objective of the awarding of the Harvard Medal is to recognize extraordinary service to Harvard University. Extraordinary service can be in as many different areas of University life as can be imagined and Betsey is very deserving of this special award. It is one of the highest awards that the University gives to anyone connected with Harvard and a first for a member of our Club. When giving Betsey the Harvard Medal, President Faust read the following citation:

The heartbeat of the thriving Harvard Club of Dallas, you have given generously and passionately of your time and talents to many areas of the University, galvanizing the alumni community and mentoring other volunteer leaders with exemplary grace, unwavering dedication and Texas-sized enthusiasm for Harvard.

Hal had a distinguished career as a cutting-edge Cardio-thoracic Surgeon, teacher, researcher and lover-of-life broadcaster prior to his sudden death in 2012.  Together Hal and Betsey had established a course at the Kennedy School for Health Care Policy Leadership at Harvard for cardiac surgeons.  Highly successful, the course was given twice a year for ten days and utilized faculty from the Kennedy School, Harvard Medical School as well as the schools of Public Health, Business and Law.  The course ran for 10 years and developed many distinguished surgeon leaders.

In past years, the Club has raised funds on an summer-to-summer basis to pay the $4,000 plus stipend. However, the Club felt that the establishment of the “Urschel Community Service Fund,” with the goal of raising $30,000 will give this program more permanence and certainty and secure it for the future. The Club has contributed over 4000 hours of skilled hands-on student support within the last decade to local non-profit organizations.

Tax deductible contributions to this fund in honor of Betsey and Hal can be made online by clicking here or by check made payable to the "Harvard Cub of Dallas". Please put “Urschel Fund’ in the notation section of your check and send it to the address: Harvard Club of Dallas, 5706 E. Mockingbird Ln., Suite 115, Dallas, TX 75206.

Click here to return to the main Philanthropy page.